Did you know, you breath about ​17,280 times a day?!  We don't think about breathing because it's a subconscious activity. How often do you actually think about how you are breathing?  Probably not a lot, if you are like most people.

Fortunately, Dr. Diana is not like most practitioners and thinks about how you are breathing and recognizes when breathing patterns are causing problems.  Many individuals lose the ability to breath correctly with their diaphragm.   Loss of the ability to use the diaphragm to breath has many causes.  Excessive sitting leads to deconditioning and destabilization of core musculature, forcing one to chest breath.  Clothing is also a significant cause as many people hollow or "suck in their gut" to look better in clothing.  Pants that are tight across the waist, belts, body shaping garment, and even corsets that are regaining popularity all have an effect on our ability to use our diaphragm.  Even bras can contribute to deconditioning of musculature that inhibits diaphragmatic function.   ​

Why Breathing is Important 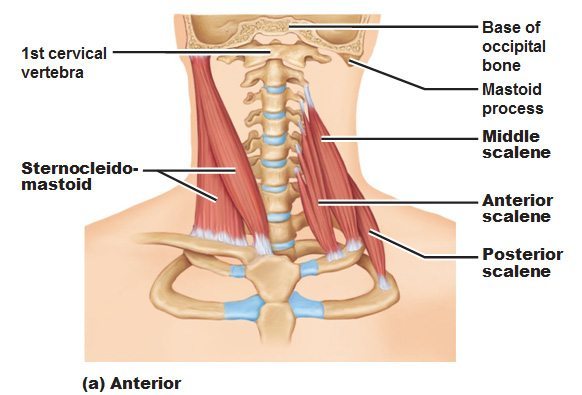 The major muscle of respiration is the diaphragm, however many people fail to rely on it as its primary respiratory function.  Often times I find people breathing with accessory muscles of respiration like the sternocleidomastoid, the scalenes, intercostal muscles, and pectoralis muscles, some of which are shone to the right.  These muscles that have connections with the skull, neck, ribs and even arm, that can end up putting stress on the neck and associated joints.  These muscles were not built for the task of breathing 17,280 times a day.

The diaphragm on the other hand is built for the function of breathing 17,280 times a day.  It's function also has many other benefits for our bodies that make our body's function more efficient and effective.

Diaphragmatic Function and the Esophagus 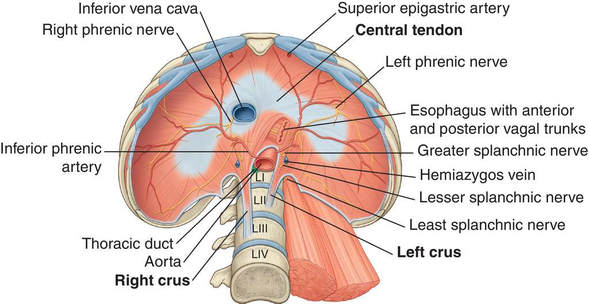 The diagram to the right the shows the diaphragm, looking at it from the bottom (or if you were in the abdomen), up towards the chest or thoracic cavity.  You can see how it connects to spinal vertebra, blends with other muscular tissue, and has three tubes penetrating it:
​1. The aorta pictured just in front of the vertebra
2. The inferior vena cava (in blue)
3. The esophagus in between the two


When the diaphragm is contacted, and descends during active breathing, it aids in closing the esophageal sphincter to keep stomach contents in the stomach, and not going back up to the esophagus.  If the stomach is displaced, as in a hiatal hernia or during pregnancy, closure can become a chore.  Sometimes manual therapies, along with proper functional breathing can help with reoccurrences.  ​ 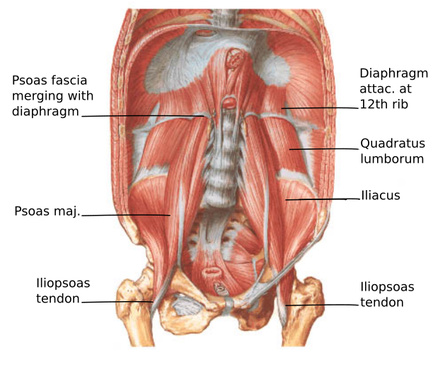 Think of the abdomen as a ball.  In order for the ball to bounce, it needs equal outward pressure in order to sustain its shape.  The muscles that make up this ball are
1. diaphragm
2. quadratus lumborum
3. psoas
4. iliacus
5 internal obliques
6. external obliques
7. transverse abdominis
8. rectus abdominis
9. muscles of the pelvic floor (levator ani, pubococcygeus, coccygeus, iliococcygeus)

All of these muscles are connected via fascia, tendons, ligaments, and several joints of the spine.

Since the spinal vertebra are clearly visualized in this picture, we can also see that by contracting and relaxing the diaphragm, the muscular attachments can aid in movement of the vertebra, which are also effected by the ligamentous attachments.  This allows for minute movements to individual spinal segments, keeping these segments in motion, and preventing abnormal loss of motion, degeneration, and pain. 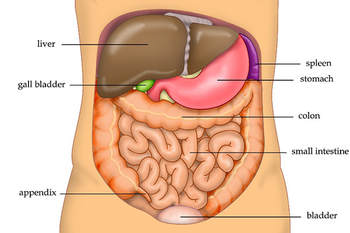 The diaphragm, along with all of the other muscles, and contractions of the heart, is important in obtaining intra-abdominal pressure, providing pressure on all sides of the ball.  This intra-abdominal pressure on all sides aids in moving CSF, which flows in a valve-less manner from the brain down to the end of the spinal canal and bathes the spinal cord.

The intra-abdominal pressure gained when we inhale, also compresses organs of the abdominal cavity.  The downward motion of the diaphragm compresses the blood filled liver and spleen.  As downward pressure is applied, and there is expansion on the sides of the abdomen, this distortion aids in movement of the digestive tract and aids in movement at the hepatic flexture and spleenic flexture, areas where bowel obstruction can be common.  In essence, breathing with your diaphragm is like giving your organs a hug!